In this blog post, Andrew Goodman Foundation Fellow Katelyn Winstead explains gerrymandering and its effects on elections. She also shares the story of a UM alum who played a key role in addressing gerrymandering in Mississippi.

Gerrymandering: What is it and Why is it Harmful to Voters?

Following the 2020 Presidential election, the United States has stimulated tons of discussion across the nation about voting- whether the system is corrupt, whether people need easier access to voting, and everything in between. There is, however, one process that is invariably unfair, undemocratic, and hurts our voters across all states, counties, and jurisdictions: gerrymandering.

The definition of gerrymandering, according to the Oxford Dictionary, is “To manipulate the boundaries of an electoral constituency so as to favor one party or class.”

The term gerrymandering gets its name from Elbridge Gerry, who was the governor of Massachusetts in 1812. While in office, Gerry signed a bill allowing his party to draw district lines that would favor them and weaken the Federalist party. Looking at the map, the district resembled the outline of a salamander; a Boston Editorial cartoonist drew it with a head and claws and termed it the “Gerrymander”. 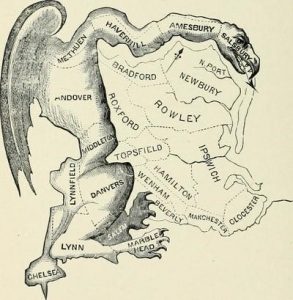 The Effects of Gerrymandering in the United States

Although both parties tend to point fingers at each other, the truth of the matter is that both Democrats and Republicans are guilty of gerrymandering across the nation. Most political scientists concur that the most notable states that are politically slanted in the way their districts are drawn are: Texas, North Carolina, Michigan, Ohio, Illinois, Maryland, Wisconsin, and California.

The effects of gerrymandering on voters’ rights are detrimental. The whole process seeks to silence the voices of party rivals and amplify those of supporters- something that is all too prevalent in politics and not only confuses voters, but also basically invalidates their vote. Gerrymandering essentially punishes voters for sticking to one party, and if they are not within the party that draws the districts, then they are unlikely to be acknowledged in the voting or political atmosphere.

Many states have begun to address the issue of gerrymandering by appointing independent redistricting commissions, which use computer software to accurately define district lines without the burdens of political ideologies. In order to properly address the issue of gerrymandering, the use of independent redistricting commissions could be one of the strongest contenders.

In May of 2017, John Chappell, a then-sophomore student at the University of Mississippi, identified Senate District 22 on a map; District 22 was comprised of zigzagged lines, spanning 120 miles south from the Delta to the Jackson suburbs. Chappell began noting demographics of voters in this particular district and realized that there was something very wrong: the African American population was severely underrepresented relative to the immediate areas on the other side of the District 22 borderline. The zigzag lines were drawn to clearly favor the votes of white constituents within District 22.

After two nights of research and redrawing lines, Chappell drew up his own map of Mississippi with fairly drawn districting lines and sent his findings to the Mississippi Center for Justice. Soon after, a lawsuit was sent to federal courts.

Judge Carlton Reeves ruled that Senate District 22 had violated the Voting Rights Act and the 5th Circuit Court of Appeals upheld; lines were to be redrawn by April 3, 2019. The new districting plan would increase the African American voting age population in District 22 from 50.77% to 58.13%.

This story of the discovery of gerrymandering by a sophomore undergraduate student shows just how much the unfair and undemocratic practice can affect the political landscape of a state; John Chappell was well ahead of his time and an inspiration for those of us that dream of political and social justice. Although Mississippi was lucky to have John Chappell at just the right time, there must be actions that will address future attempts of gerrymandering. Employing an independent redistricting commission can ultimately lead to fairly drawn district lines in which every voters’ voice matters and is not silenced by unfair and undemocratic political rivalry.

Hello! My name is Katelyn Winstead, and I am a junior transfer student from Ocean Springs, MS. I am in the process of completing a double major in public policy leadership and philosophy, and I am also a Sally McDonnell Barksdale Honors Scholar. After I complete my undergrad, I plan on enrolling in a dual Public Policy and Juris Doctorate program in the hopes of continuing on to a career in the areas of law and public policy.

Civic engagement is important to me because I am a strong believer in the voice of the people; I recognize that our voices matter, and that the ways we choose to get involved have a direct impact on our society and democracy as a whole. Protecting the civil and voting rights of citizens is of utmost importance to me, because those rights are what allow us to participate in our democracy and make our needs become heard. Becoming involved with the Andrew Goodman Foundation has already taught me so much about civic processes, advocacy, being a leader, and representing the voices of voters that need to be heard. AGF has given me the opportunity not only to advocate for voting rights, but also to continuously stay engaged within the community and establish lasting impacts on campus.

My favorite part about the LOU community is the welcoming atmosphere and diverse viewpoints that students and community members bring. Starting out at Ole Miss was nerve wracking, and I was so worried that I would not make friends or be able to get involved, especially in the middle of a global pandemic. The LOU community instantly made me feel at home and, despite the roadblocks of the pandemic, provided plenty of different opportunities to get involved both on and off campus. I had complete strangers helping me find a job, giving me recommendations on which organizations to join, and introducing me to all the beauty of Oxford and the University. The sense of community and belonging here is incomparable, and I am so grateful to have been welcomed into this community with open arms.

If you are interested in getting in touch with Katelyn about all things related to voting rights and access, civic engagement, or to hear more about The Andrew Goodman Foundation, email engaged@olemiss.edu.

In this series of posts, UM Voting Ambassadors are previewing what is on the Mississippi ballot, so that you understand the offices, the statewide ballot initiatives, and your choices as you prepare to cast your vote. In this post, Voting Ambassador Katelyn Winstead shares about the MS Ballot Initiative 65 and Alternative Measure 65A, regarding medical marijuana, one of three statewide initiatives on the ballot. For those voting out-of-state, please reference our State by State Voting Guide for information on your ballot.

Initiative 65 is a citizen-sponsored initiative designed to legalize marijuana for those with “debilitating illnesses” by amending the state constitution. Initiative 65A is an alternative initiative offered by the legislature, with many of the specifics to be worked out later. These options can be confusing for voters, so here is a breakdown of the alternative proposals.

So, what is the difference between Initiative 65 and 65A?

Both initiatives, if passed, will procure an amendment of the Mississippi State Constitution to legalize medical marijuana. The main difference between the two are the specifications laid out. Initiative 65 will allow patients to attain medical marijuana if they have one of the 22 stated qualifying conditions; patients would be able to have up to 2.5 oz at a time and the sales tax on medical marijuana will be in accordance with the state sales tax which is, as of 2020, 7%. Initiative 65 is projected to collect at least a few million dollars in revenue after assessing the first-year implementation costs. The initiative also states that the Mississippi Department of Health will oversee the medical marijuana program.

Alternative 65A does not specify the qualifying conditions of patients, the limits of possession, tax percentage, nor the fiscal impact that it would have on the state. Alternative 65A does provide zoning laws, prohibiting any medical marijuana treatment center from being within 500 ft. of schools, churches, or child-care establishments. The alternative measure does not give any details as to who would oversee the program but affords that it will be administered under an appropriate state agency. Under 65A, smoking medical marijuana would be limited to only those patients who are terminally ill. If alternative measure 65A is passed, legislatures will have to put in a lot of work to narrow the specifications of the initiative and provide concrete regulations and procedures.

What should I expect to see on the ballot?

For a comprehensive analysis of Initiative 65 and 65A, including arguments for each, fiscal analysis, and more check out: